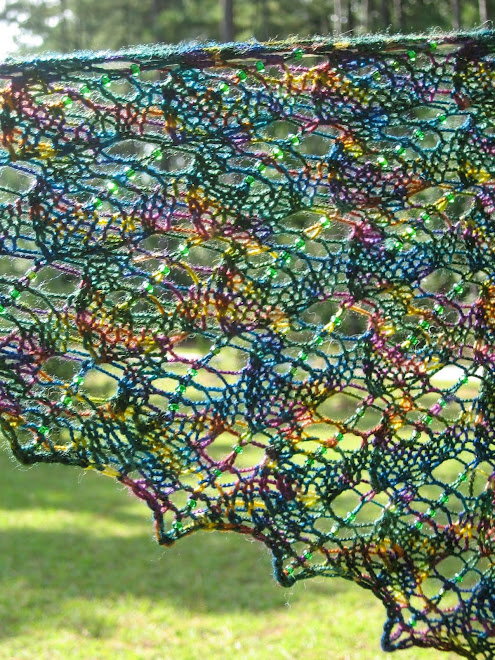 What Fishermen Wore, Part 1: The Fisheries Museum of the Atlantic

I am lucky to have a  brother in law who likes boats, and so I get to spend some time in them. Choosing outfits for this requires some thought. I live where it's warm, but the wind on a boat even in Savannah Georgia can still make a jacket necessary.  Hats will fly off.  As we go out when the weather is nice; I think about how the fishermen of old must have geared up well in natural fibers, in a cold climate, year round.

I've been lucky to look at historic fisherman's gear in both Nova Scotia, and the island of Inis Oirr, or "Inisheer," one of the Aran Islands in Ireland.   A future post will address fisherman's gear that I saw there.

Here are some photos from the Fisheries Museum of the Atlantic in Lunenberg Nova Scotia where I visited with my good friend Barb in 2018.  Sadly, I was photographing through the glass. 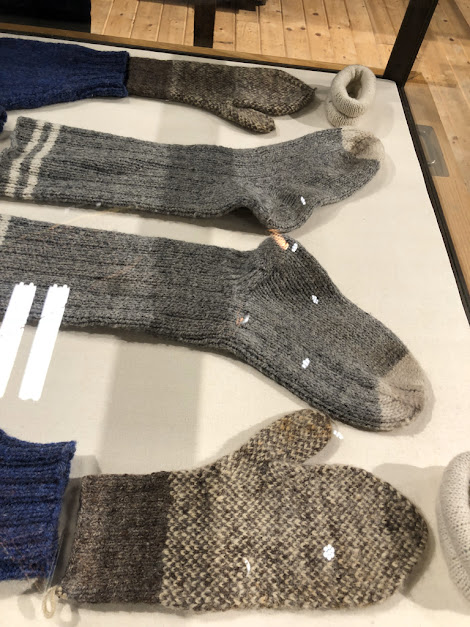 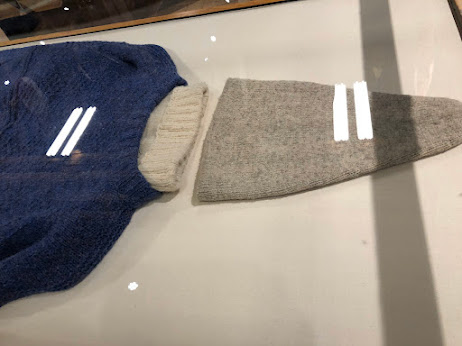 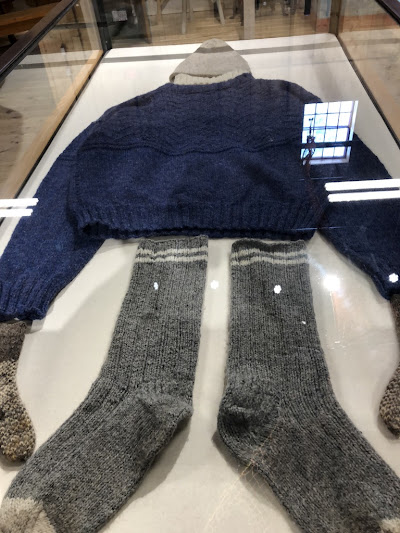 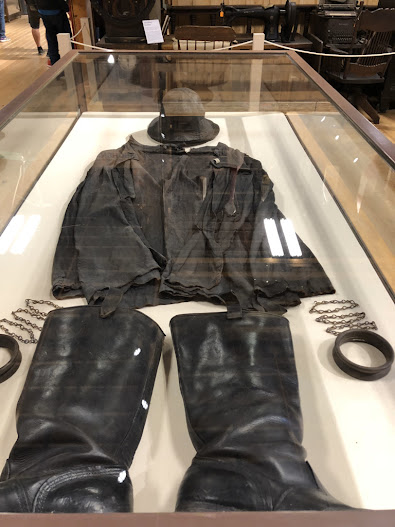 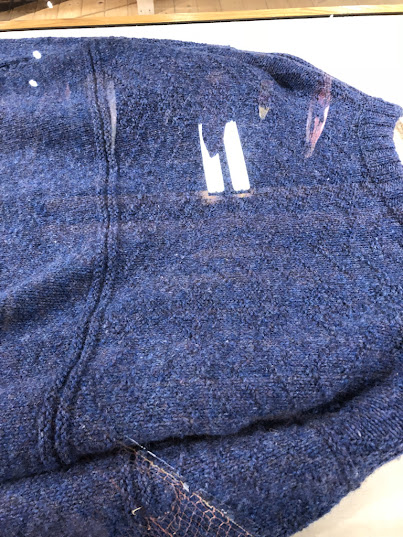 Above, the ubiquitous "gansey" sweater, sailed and shared around the world especially in the North Atlantic.  This makes me wonder what color they were before commercial dyes in the later 1800's... 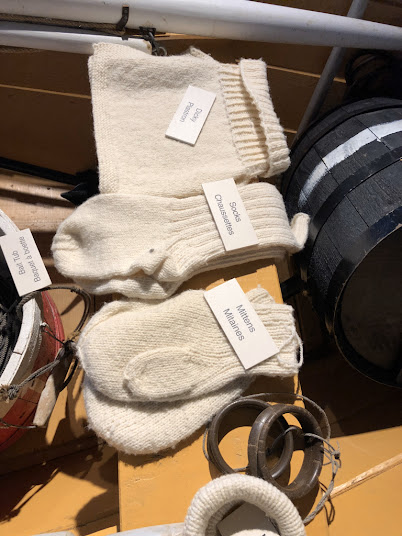 The above mittens look fulled. They bring to mind an article that I read with fascination in Yankee Magazine years ago in my Grandmother's home in Northfield Falls Vermont. Published in 1983. I may still have the clipping but here is a link to the article:  https://newengland.com/today/living/crafts/boiled-wool-mittens/. Knitting instructions included! 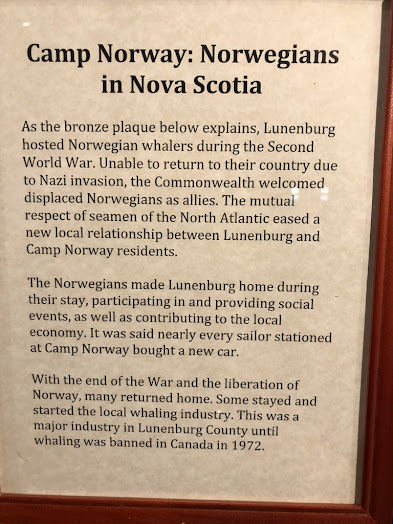 Above,  an example of the aforementioned cultural sharing! 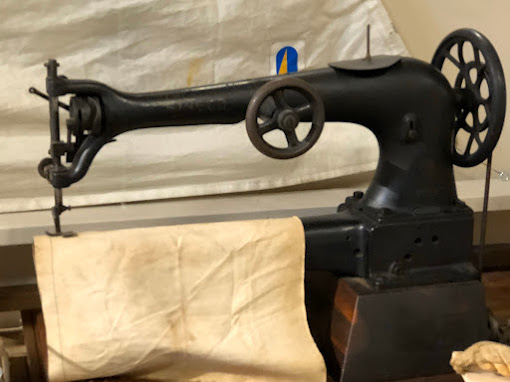 I photograph old sewing machines wherever I travel, and more often as not, they are Singers. This is a heavy duty, used for sails. 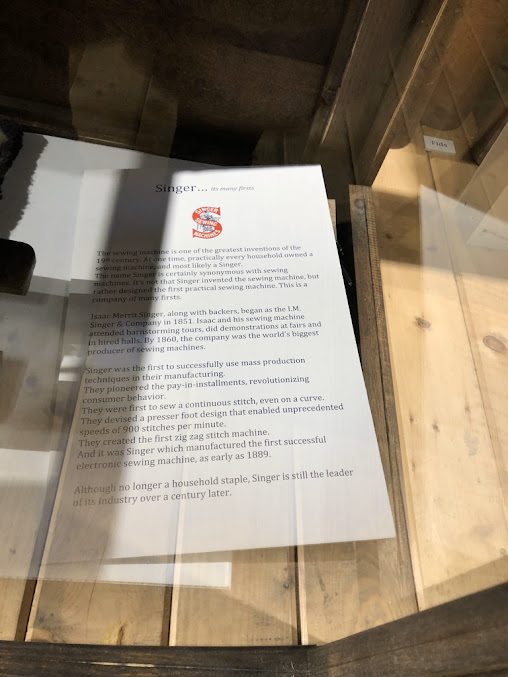 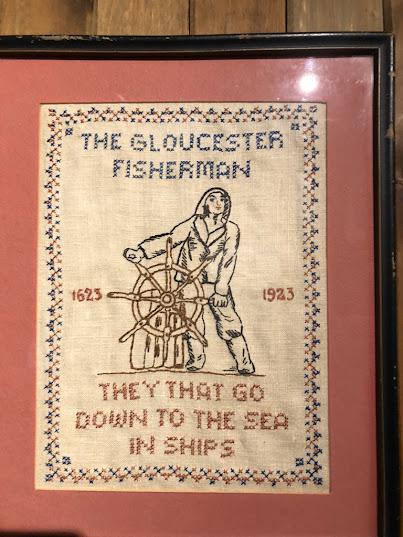 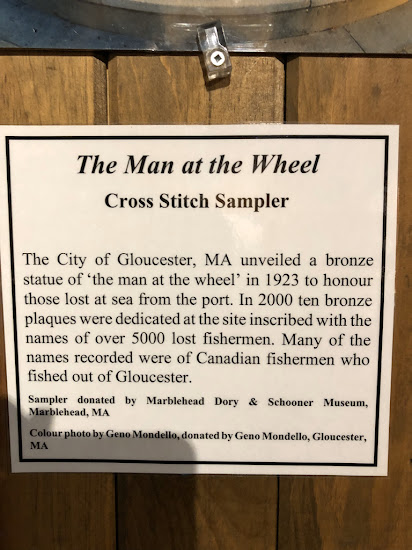 I like the linen fabrics from Fabrics-Store.  This top is in their lightweight linen and the pattern is from their website. Patterns are downloadable with Acrobat reader if you are a registered customer. This is the Agustina Boxy Top which I have modified to not include the bands around the capped sleeves.

I cut out the two pattern pieces for front and back after washing the linen.

Then I used an arashi technique in an iron-reduced indigo vat.  I first wrapped it around the pole and dyed it. I did three dips. Then, I  undid the wrap, and clamped as you can see on the front of the top.   I dipped twice more.

Then, after the pieces dried, I sewed together. I like to hand stitch and finished the neckband and the sleeves by hand. I left the hem undone, maybe due to laziness! I may do some decorative stitching on the front, however. The lines just call to me!

I love the coolness and the drape of this top! 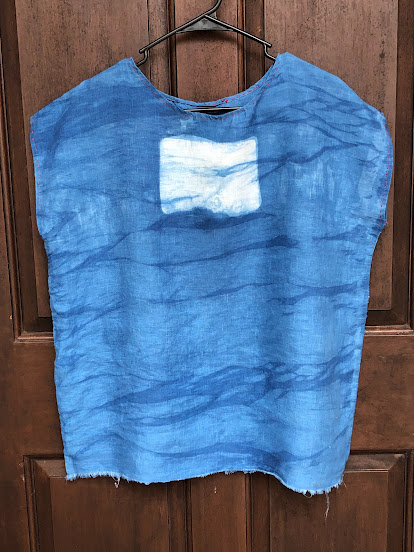 I love knitting with wool....it's pliant and forgiving as you knit. But it's not really practical for the climate where I live. So I am working on spinning cotton...probably not for knitting but for weaving. Here is my first effort on my Ashford traditional spinning wheel. This is Sea Island cotton that it supposed to have a "long" staple compared to "upland" cotton. But the staple is pretty short, I would guess 3/4 " or less. So one must pay attention while spinning...this first length is double plied. I bought 3 colors (they had five) from http://www.ewephoricfibers.com/ at the Southeastern Animal Fiber Fest last weekend. 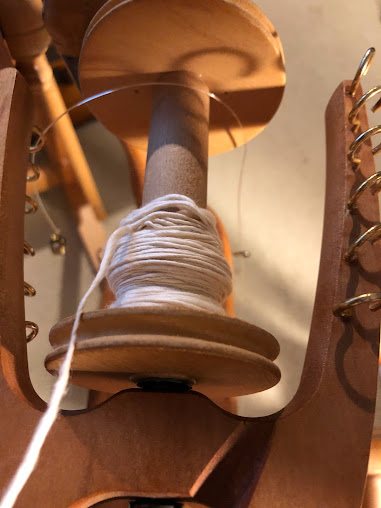 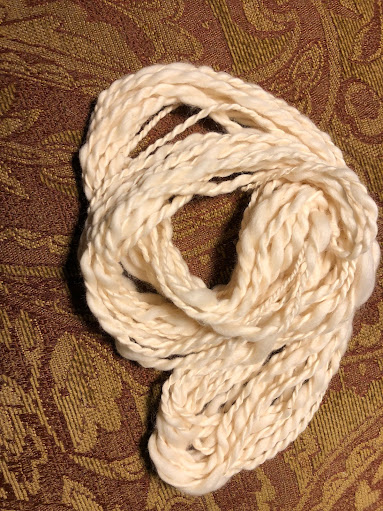 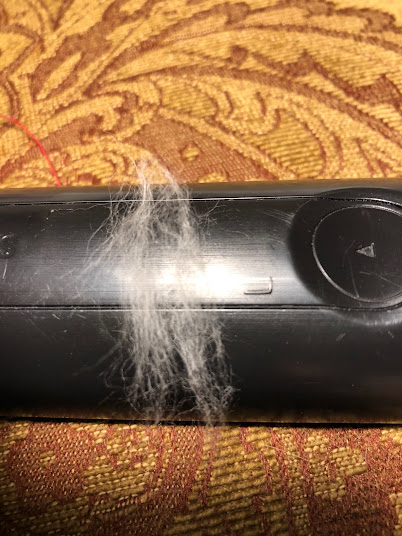 I bought three colors, white, cinnamon, and green. They had 2 other colors that I didn't purchase. Here is an interesting thing: if you simmer the cinnamon and green in water plus baking soda, the color deepens. 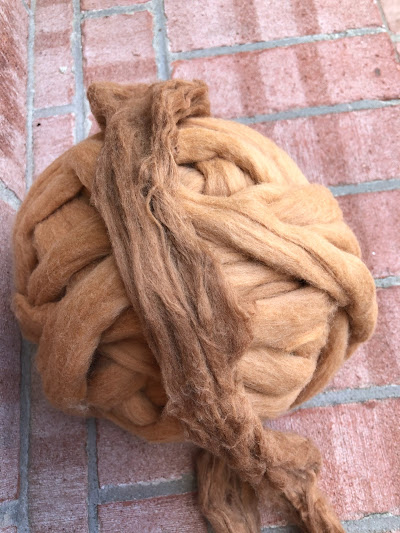 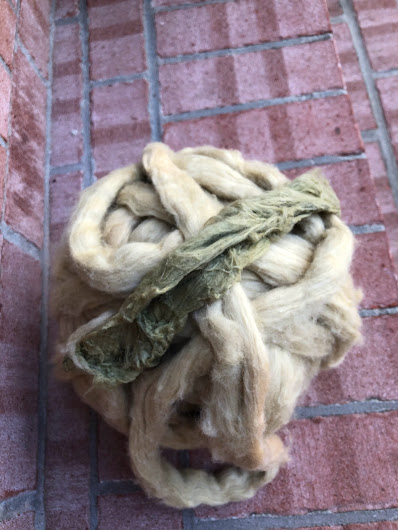 Here are some cotton samples from my trip to Peru years ago... 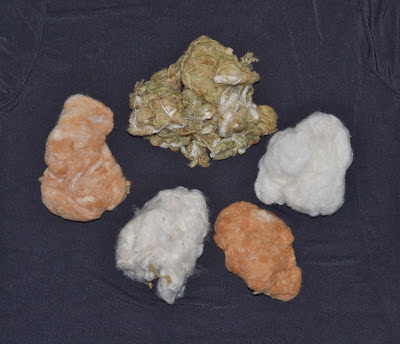 I found Carole Barenys' pattern long ago, back when I followed the knitting.about.com site. I really liked that site.  They had lists and links to online patterns.

The yarn is Adriafil Knitcol; advertised as worsted but I would call it sportweight! I got 6 stitches per inch. Nevertheless,  I like the yarn, warm, soft enough for a baby, and machine washable. 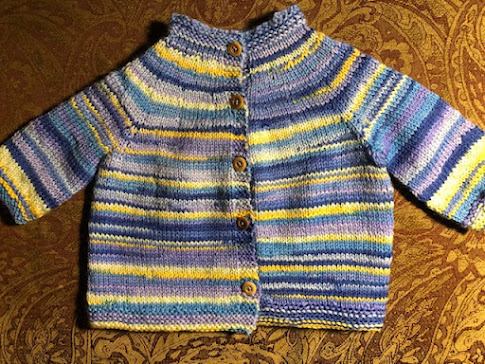 It looks like knitting.about.com was taken down in 2017. It has now been` subsumed by https://www.thesprucecrafts.com/knitting-4162934. I can't find this pattern there anywhere.  HOWEVER the pattern is here: http://carole.barenys.com/YokeSweater.html.  I eliminated the decorative stitch pattern on the yoke.   Carole has other free baby knit patterns!

My friend Janet is messing with indigo in a big way, and I am going along. Here is some stuff that um...happened. I think that "indigo" is a catchall term for any plant that contains the indican molecule.  Janet has both persicaria tinctoria and indigo suffruticosa in her garden.

So, Janet put some "Japanese indigo," persicaria tinctoria,  (out of her garden) in the blender with some ice, and dunked some wool in.  Now, I should add that while I like dark "indigo" blue, I am a bigger fan of green.

I took this (unreduced) minivat of green slush home and put some combed merino top in it. What did I get? Chlorophyll coloring I suspect, although it has a blue tinge. It is a pale minty color. I am waiting for it to fade. I love it. 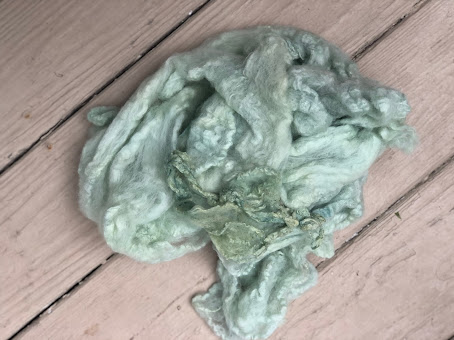 Then yesterday, I went over to Janet's place which is dubbed "Camp Janet."  (Camp Janet involves a major wonderful fiber-and-dye studio).

I decided to try some  hammering.  I've always thought that this was a great activity for children and not for me, so of course here I go... In the photo below, in the oval, is the hammered tinctoria...it did not transfer much. However, the suffruticosa hammered beautifully.  In the bottom part of the photo, you can my experiment to  dip the linen in a rust and water bath but the print came out less defined because it was wet; however the iron did not change the color (bottom of the photo).   (The dark brown red colors are flower petals.) 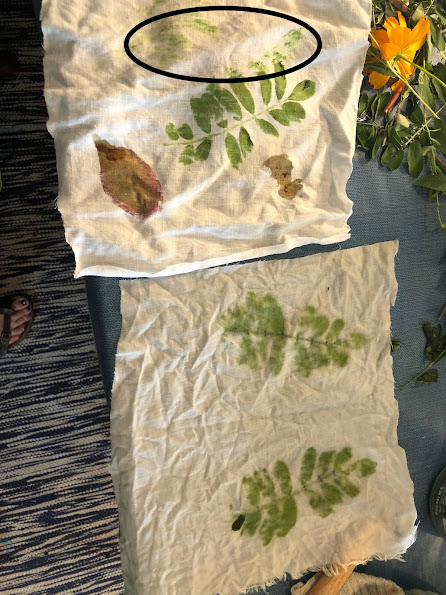 Here is a close up of the suffruticosa hammered print (with some fainter persicaria on the left). I'm pretty sure that this is all cholorophyll. We will see how lightfast it is and for how long...I love the green. 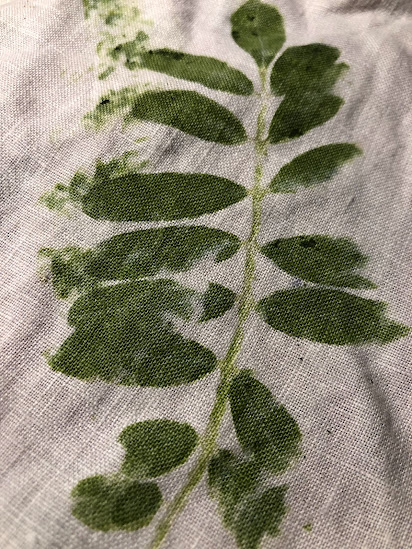 And then,  Janet  put up with me asking her to simmer some of the indigo suffruticosa without reduction. This allowed me to put in a roll of paper, leaves, and linen to simmer. (Yeah botanical printing of a sort which basically means MY sort).

As you can see below there is green around the border that survived the simmer. The photo shows  linen above and watercolor paper below.  The green turned out gray-green on the paper. This print included my favorite sumac leaves, rhus copilinum. With a nasty smudge of coreopsis that turned rather bloody looking (but of course looks better on the paper...) 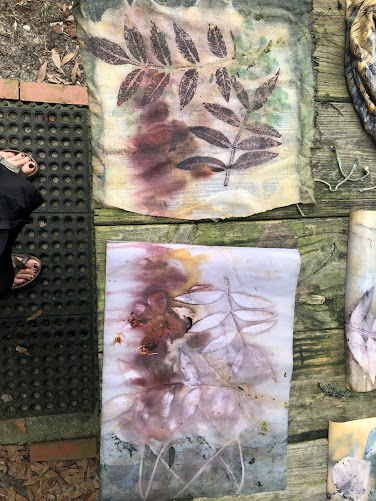 I used some of the hammered linen in this roll and it survived the heat and pressure (see below in the circle). 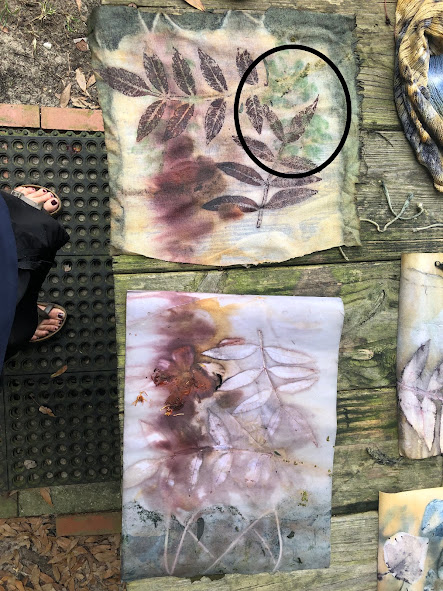 And...in the mean time...I have learned that  cholrophyllin extract  exists as a dye...
Posted by Wendy at 12:40 AM No comments:

OK so this is BSJ number 9.  I tend to just pick up some yarn, do a sample to try the fabric and drape, and get knitting. This garment is going to Lifting Hands International,  so size is unimportant.

I decided that I would try a hood. There are several online BSJ's with hoods but I decided to try my own. 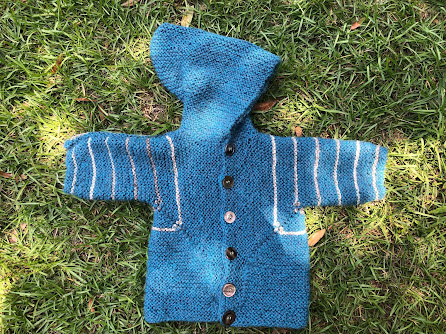 After finishing the sweater body, I sewed it together. Then:

2) Increase 2 stitches every other row on either side of two middle stitches at the back of the hood.  I did this for about 5 inches.  This will vary with the "size" of your BSJ.  My chest size is 24 inches, so possibly age 6.

3) Keep knitting straight until the hood looked "long" enough (i.e. the face opening was large enough for the size of the sweater.

4) Divide the hood stitches in half and kitchener stitch them together.  Add a pom pom to the back of the hood if you like. (I'm not a pom pom person so I didn't).

On my next BSJ, I'm going to do the cuff sleeves in ribbing.

According to my Ravelry group, "Hats and More for War-Torn Syria" (not just Syria anymore but the name sticks) LHI sent containers to Ukraine, Jordan, and Afghanistan in July 2022, and another is headed to Poland in August 2022.  I know that this sweater will help to warm a small child.

Even though Elizabeth Zimmerman's original article (which I clipped from Knitter's magazine, dated 1989) hints that she did not know what she was doing when she "unvented" it.  I suspect that she fully knew, as she knit, what she would wind up with...a "T" shape in knitted form.

I've knit many of these but according to my Ravelry projects, this is only number 7. (I think that there have been more...I know for certain that this is number 8 at least).

I keep knitting it over and over because it is so much fun. One thing I like about this sweater is that just increasing yarn weight increases the size. Elizabeth's Grandson reinterpreted it in circular form, which I did once. It lent itself to colorwork.

Here is my recent effort, for a local Ukrainian refugee baby, and the "Circular Stranded Baby Surprise Jacket" done in 2016, Number 4.  This pattern concept is now available in baby through adult sizes. 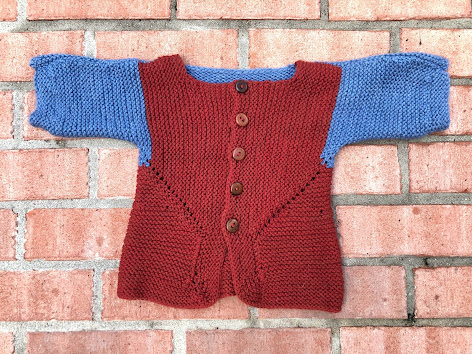 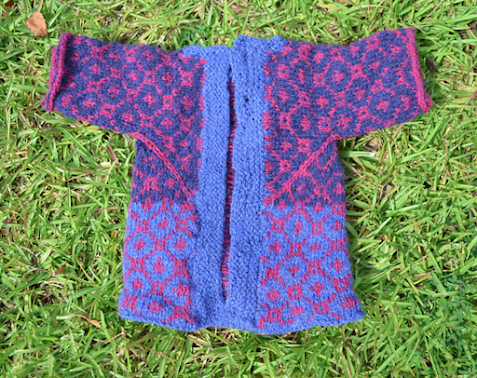 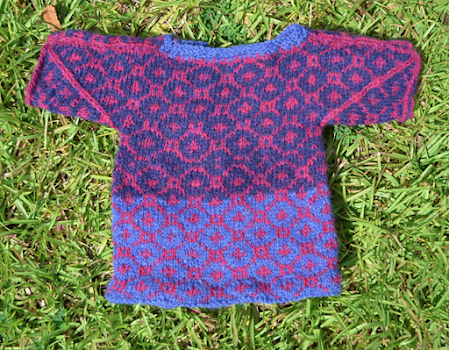 Thanks for reading my blog! I hope you enjoy what you're reading; I know that I love writing it. Please feel free to leave comments, or you can contact me at spinsjalatgmaildotcom. Also you can find me as Spinsjal on Ravelry!